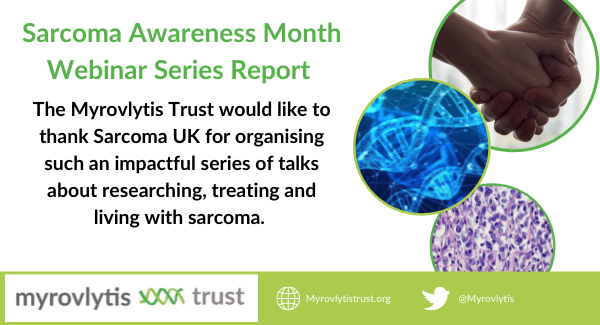 This July we were delighted to take part in Sarcoma Awareness Month and attend a series of lectures run by Sarcoma UK which brought together clinicians, researchers and patients in the sarcoma community to share their knowledge and experience. This report shares with you the highlights from the event including the inspirational stories from patients living with and beyond sarcoma.

The lecture series was kickstarted with an important discussion talking about the effects sarcoma can have on women’s health including infertility and early onset menopause.

Uterine leiomyosarcomas are soft tissue sarcomas that grow in the uterus. In a powerful personal account of her journey, Karen Delin (Sarcoma patient and advocate) described how before she was diagnosed with uterine leiomyosarcoma she assumed that she just had a fibroid (benign uterus growth). Dr Seddon (Clinical Oncologist), an expert in the management of sarcomas explained that a fibroid that is ‘growing’ or appears to be invading the wall of the uterus is suggestive of leiomyosarcoma. Interestingly a key difference in the management of fibroids and uterine leiomyosarcoma is in the surgical intervention required. Laparoscopic surgery is the preferred technique for fibroids as it is less invasive than open surgery, however, to do this the fibroid is broken down while it is still in the uterus. This technique is advised against if leiomyosarcoma is suspected, as breaking up the tumour in the uterine cavity risks spreading the malignant cells throughout the abdomen.

Effects of treatment on women’s health

Many sarcomas occur outside the uterine cavity, however, treatments including chemotherapy and radiotherapy can cause infertility and lead to early-onset menopause. This can have a huge impact on an individual especially as certain sarcomas such as osteosarcoma and Ewing sarcoma occur in adolescence/ young adults and the possibility of becoming infertile can be life-changing. Although ovarian stimulation and egg harvesting is an option for patients Dr Seddon explained that this takes time and if cancer requires urgent treatment it may not be possible.  She added that younger individuals are less likely to become infertile after treatment but it is a complication that needs to be considered. Sarcoma patient and advocate Emma McCloskey described how despite thinking she didn’t want children losing that ownership was very challenging and she wished there had been some psychological support available.

Chemotherapy and radiotherapy can also induce early menopause, usually in women in their 40s/50s. It is important that doctors consider symptoms of menopause in addition to chemotherapy side effects in women undergoing these treatments as managing them can significantly improve quality of life. Medical Oncologist Dr Benson discussed management options for menopause symptoms including hormone replacement therapy if eligible, exercise and in some cases acupuncture.

This educational session highlighted the importance of communicating the risks of cancer treatment to women and providing emotional support throughout the process.

The second session focused on clinical trials and brought together a panel of patients and clinicians to share their experiences and discuss how, despite the challenges of clinical trials, they can have a very positive impact on the sarcoma community.

Clinical trials are medical research studies that require patient participation and aim to answer medical questions, usually concerning a new treatment for a particular disease or syndrome. This can take the form of a new drug, surgical technique or medical device, either alone or in combination with an existing treatment.

Jane Lochrie (sarcoma patient) was diagnosed with sarcoma in 2016 and she discussed how you don’t need to be at a particular centre to be eligible for a clinical trial.  Jane took part in a clinical trial at the Royal Marsden Hospital which meant flying to and from Scotland regularly to take part. She described how the care and support from clinical trial nurse specialists was outstanding and how the flights were worth it.  Emily Travis (sarcoma patient and advocate), was told in 2014 that she would not be around in 2015. Emily voiced how important it is to do your own research using resources such as clinicaltrials.gov, as this was how she found a clinical trial. It is then important to discuss it with a doctor and consider side effects of treatment, time commitment, emotional wellbeing and the possibility that it may not work if you do decide to take part in a trial. Emily also described how ‘unbelievable’ the research nurses were and how they supported her through the whole process.

The Royal Marsden Hospital in London is currently conducting 20 sarcoma trials but Clinical Oncologist Dr Zaidi and Surgical Oncologist Mr Strauss stated more are needed. This is because there are many different types of sarcoma, which are managed differently and therefore to get sufficient participation for a certain subtype requires multi-centre, preferable international studies.

Mr Strauss has set up the Eortc Strass II trial looking at treatment options in retroperitoneal sarcoma patients. This study is very exciting as not only is it being conducted in 8 centres in the UK but also centres throughout Europe, America, Canada and Australia. Although we strive for more international studies, Mr Strauss added that it can often be challenging to get these funded for rare diseases and it mostly relies on the charity sector. Nevertheless, seeing studies of this nature taking place demonstrates that large collaborative projects are possible and will hopefully help to identify new and improve therapies for sarcoma patients.

The second session beautiful encapsulated the patient and clinician perspective of clinical trials and the areas to improve and focus on are information access and collaboration.

Genomics: the Future of Sarcoma

Five leading experts in genomics came together and shared their knowledge of how understanding the genetics of sarcoma will shape the future of sarcoma therapies.

The session started with Andy Beggs, Professor of Cancer Genetics and Surgery, describing the genetics of sarcoma as an undiscovered landscape. However, he emphasised that the current tools and technology available is changing this, leading to more exciting studies. One momentous study is the 100,000 genomes project, which conducted whole-genome sequencing for almost 600 sarcoma patients.  The sarcoma lead for the 100,000 genomes project, Professor Adrienne Flanagan OBE, described how information gathered from these patients has been invaluable and will pave the way for exciting discoveries including novel biomarkers and predictive outcome measures. This will hopefully lead to new and improved treatments for sarcoma patients.

Medical oncologist Dr Alexander Lee demonstrated how understanding the genetics of a condition can revolutionise treatment. Gastrointestinal stromal tumours (GIST) are sarcomas that occur in the gastrointestinal tract and were once untreatable. However, an exciting discovery found that mutations in the oncogene KIT were driving the tumour and could be targeted to successfully treat GISTs. In addition to identifying specific sarcoma mutations, there are some mutations, for example, NTRK fusion (mutations across three NTRK genes), which drive cancer development in many different types of solid tumours including sarcoma. This is exciting as the same therapy has the potential to be used across a wide range of cancers rather than just one type. Drugs targeting NTRK fusion have shrunk tumours in up to 2/3 of patients in multiple different cancers. However, these mutations are rare so the next challenge is in identifying patients that would benefit from these NTRK fusion targeted therapies.

The session ended by asking the panel what are they are most excited about for the future of sarcoma. Dr Zoë S Walters, lecturer in Transcriptomics shared her enthusiasm for drug repurposing. By gaining a better understanding of genetics, drug repurposing becomes more viable and has the potential to rapidly bring more effective and less harmful drugs to clinic.  Richard Davidson, Chief executive of Sarcoma UK added that ‘genomics has given us promise’, he hopes that not only will it lead to early diagnosis and better predictive outcomes, but more personalised and effective treatments.

Our understanding of the genetics of sarcoma is continuously growing and it was incredible to hear from experts in the field about what the future holds.

Living Well and Beyond Sarcoma

Bringing together the largest panel yet the final talk in the series was a heartfelt and inspirational discussion of living with and beyond sarcoma. One of the key messages was remembering that you are always you, no matter what your diagnosis.

Fatigue is a common side-effect of many cancer treatments in addition to the emotional fatigue which comes with the diagnosis of cancer. Fatigue can manifest as low energy, low mood, poor concentration and/or the inability to feel refreshed after sleep, resulting in reduced quality of life.  Experienced Occupational Therapist Kate Scanlan discussed strategies to support patients through fatigue to enable them to get back to doing what they want to be doing. She advised regular sleep cycles, tailored exercises and following the three Ps: Prioritisation, Pacing and Planning.

Prioritisation: Consider what you want from your day and do those tasks that will help you achieve this.

Pacing: Spreading tasks throughout the day and stopping before you develop symptoms of fatigue.

Roger Wilsons CBE (sarcoma patient and advocate) gave an inspirational account of his long-term fatigue after cancer treatment, lasting 2 years, and strategies he put in place to overcome it. He would set small self-targets that were achievable and ensured he had contact with others that made him feel like himself. He added that some days you feel you can’t, but taking small steps at a time will make it easier.

The topic then moved to lymphoedema, a chronic side-effect of some cancer treatments. Debbie Artis, specialist physiotherapist, described how lymphoedema is caused by disruption of the lymphatic system, resulting in long-term swelling most commonly found in the limbs but can occur anywhere in the body. Lisa Hall (Sarcoma patient and advocate) shared how she developed lymphoedema in her breast after having her arm and shoulder amputated due to sarcoma. Normally, compressive garments can help relieve the feeling of heaviness caused by lymphoedema, however, Lisa was not initially able to find any for her torso. After extensive research, she found a company who were creating such garments and trialled the torso compression garments for the company. Both Lisa and Roger emphasised that support is available for lymphodema and that you will learn to manage it.

A reoccurring theme throughout this session was the importance of looking after your mental wellbeing. A study showed that anxiety around the recurrence of cancer is common in the sarcoma community and can affect the quality of life.  Dr Lesley Storey, Lecturer of Social Sciences, is involved in an invaluable new study called REASSURE_ME, which aims to develop a sarcoma specific intervention to manage the fear of recurrence.

Psychotherapist Jo Ham described how levels of anxiety would change throughout a patients cancer journey and that although ‘you can’t stop the waves you can learn to surf them’. She then recommended two techniques to help manage anxiety and improve wellbeing for those who have been diagnosed with sarcoma.

Worry Time: Allotting time in your week to worry (avoiding evenings) for around 10- 15 minutes can reduce anxiety. Any time a worry occurs write them down and only address them in the allotted ‘Worry time’. When you address the worries also try and think about the best that could happen, not just the worse.

Breathing exercises: If you feel anxious take the time to focus on breathing, always breathing out longer than you breathe in.

Lastly, Jo added even though you are going through this experience it doesn’t change the core person you are. You are who you are regardless of your diagnosis.

This final session revealed how many people are involved in cancer care even after treatment may have finished and how important it is to get support for both your physical and mental wellbeing.

The Myrovlytis Trust would like to thank Sarcoma UK for organizing such an impactful series of talks and we are looking forward to future webinars. The sessions are available to watch here.